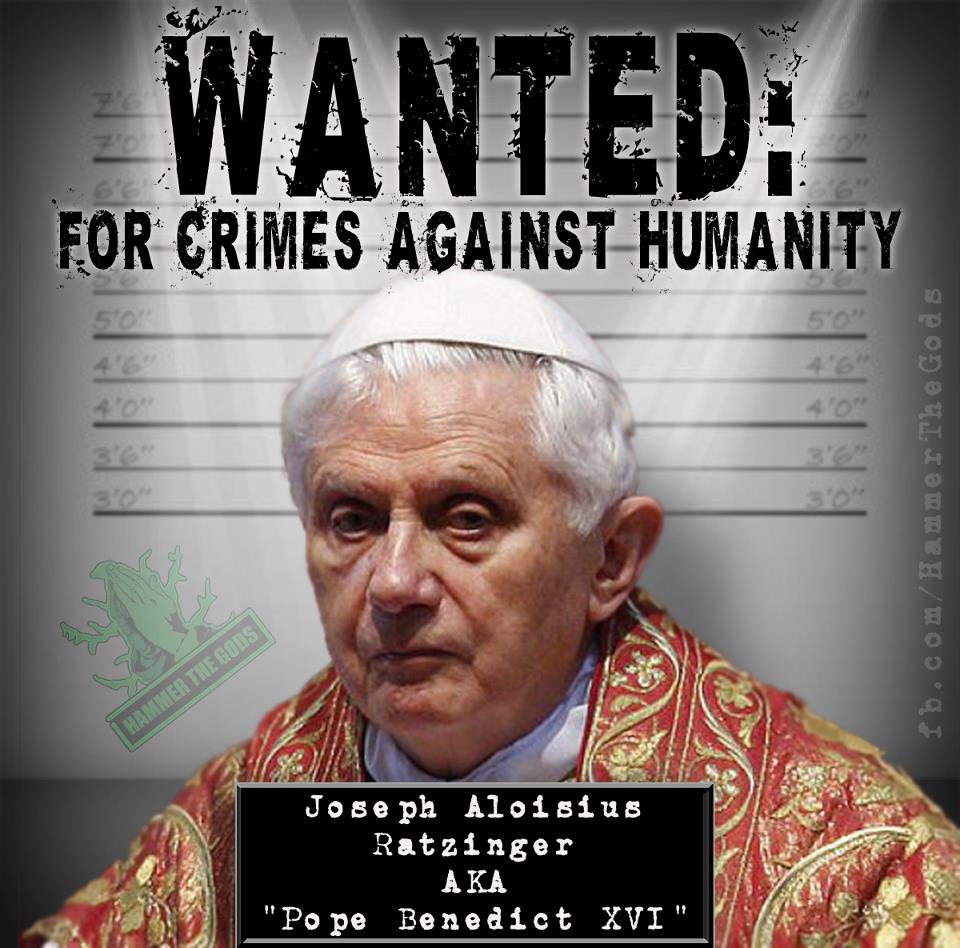 (Update)  Based on feedback, I wish to provide you with some additional information...   But, research it yourself as well.  Submit any updates here, and I will add them to this caption; then check back for ongoing updates!

2. Propagating the LIE that "condoms are sinful" and "the use of condoms increases the likely-hood of HIV/AIDS transmission" - in the most HIV/AIDS ravaged countries in Africa - and around the world – effecting millions.

4. Significantly contributing to the bigotry in the world – actively opposing equal rights for women (and women’s reproductive rights), gays and other minorities – reducing the collective human rights of all people.

5. Contributing to ignorance and slowing human progress and development -through the propagation of an anti-science, anti-intellectual mentality - now pervasive in world cultures.

7. An untold number of violations against reason, honesty, integrity, human decency and human rights.  Harm, such as these, has been well documented throughout history - and to this very day.

Do you need more?

"Christopher Hitchens: “The pope’s entire career has the stench of evil about it” ", via Network for Church Monitoring: http://churchandstate.org.uk/2013/02/christopher-hitchens-the-popes-entire-career-has-the-stench-of-evil-about-it/

(Reuters) - Pope Benedict's decision to live in the Vatican after he resigns will provide him with security and privacy. It will also offer legal protection from any attempt to prosecute him in connection with sexual abuse cases around the world, Church sources and legal experts say.

Pope warns of danger of "witchcraft":http://blog.beliefnet.com/news/2011/11/pope-warns-against-witchcraft.php

Persecution of "witches," a problem in Africa:http://thinkafricapress.com/burkina-faso/protect-or-prosecute-african-states-and-witchcraft-accusations

The HBO movie website referenced in this^ interview:  http://hbowatch.com/hbo-documentary-film-mea-maxima-culpa-silence-in-the-house-of-god/

"US Bishops’ Roman Connection: Politics with a Rightward Slant":  http://churchandstate.org.uk/2012/12/us-bishops-roman-connection-politics-with-a-rightward-slant/

Reproductive Rights of Women in Philippines - Blocked By Catholic Church: Philippines has the highest fertility rate in Asia, east of Pakistan.

Stephen Fry Speaks Out Against the Catholic Church as a Force for Good in the World:  http://www.youtube.com/watch?v=IEhtOhwL8xkApx. 10 Min.

*Note: We do not support , suggest or condone any acts of violence - comments that do, will be deleted immediately.

(Update)  From the admin of:

Hi guys, this is a very unique time in history, and your help can really mean a lot... Our hopes to bring justice to the Vatican are actually plausible at this point!