http://www.facebook.com/ArrestThePope
http://www.opus-dei.co.uk/
Pope’s Resignation May Make International Prosecution Easier
February 11, 2013, New York – In response to news that Pope Benedict XVI plans to resign, the Center for Constitutional Rights issued the statement below. The Center for Constitutional Rights filed a case with the International Criminal Court on behalf of the organization Survivors Network of those Abused by Priests (SNAP) against the pope and other high-level Vatican officials for crimes against humanity in September 2011 and provided additional documentation in the case in April 2012. The prosecutor is currently reviewing the evidence.

“This pope is responsible for rape and other sexual violence around the world, both through his exercise of superior responsibility and through his direct involvement in the cover up of specific crimes. Tens of thousands of victims, most of them children, continue to suffer because he has placed the reputation of the church above the safety of its members. His resignation will make international prosecution easier for national systems of justice that still grant immunity to current heads of state. 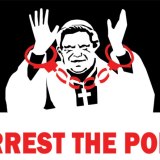 In this case, all roads really do lead to Rome. Not only does Pope Benedict XVI bear responsibility in his official capacity for the church-wide policy of systematic and widespread concealment and enabling of the crimes, but he bears individual responsibility in a number of cases in which he ensured that perpetrators would be shielded and protected and left in place to assault more victims.

The International Criminal Court does not recognize any of the traditional immunities to prosecution for crimes against humanity: whether he is in office or not makes no difference, but it may lower the bar of resistance enough for justice to be served. We share SNAP’s goal of preventing even one more child from being raped or sexually assaulted by a priest, first and foremost, and then further violated by a Church that consistently turns its back on victims and knowingly exposes its congregation to risk of rape and sexual violence.

For more information on the case, visit http://ccrjustice.org/icc-vatican-prosecution-0.


SNAP is the world’s oldest and largest support group for clergy abuse victims. It has existed for 23 years and has more than 10,000 members. Despite the word “priest” in its title, it has members who were molested by religious figures of all denominations, including nuns, rabbis, bishops, and Protestant ministers. Visit www.snapnetwork.org.

The Center for Constitutional Rights is dedicated to advancing and protecting the rights guaranteed by the United States Constitution and the Universal Declaration of Human Rights. Founded in 1966 by attorneys who represented civil rights movements in the South, CCR is a non-profit legal and educational organization committed to the creative use of law as a positive force for social change. 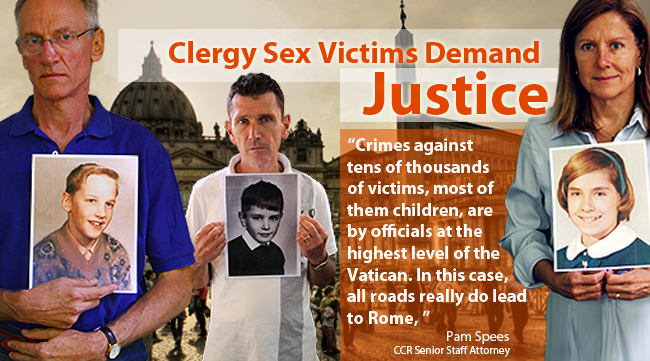